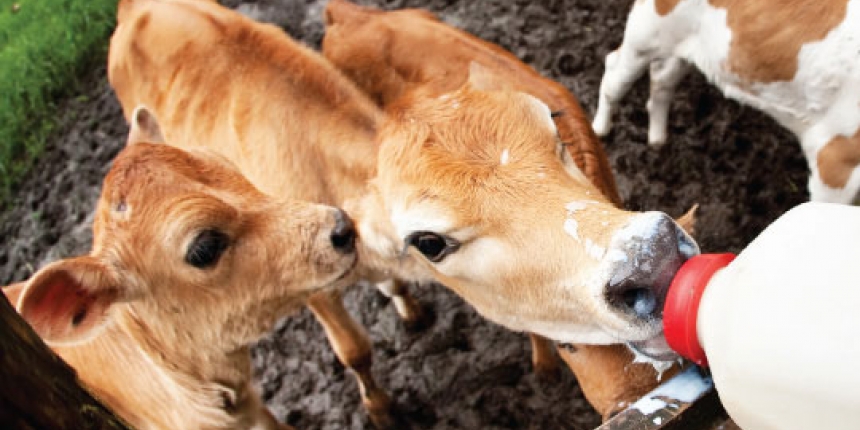 The choice between bottle or bucket feeding new dairy calves is often determined by farm management practices…because, when it comes to calf performance, neither stands out.

“There’s not really a significant difference between the two as far as weight gain or overall health” based on the available literature, says Jen Bentley, Iowa State University Cooperative Extension dairy field specialist at the Chickasaw County office in New Hampton.  “There is mixed research on the incidence of diarrhea and the duration of the diarrhea.  Some research projects show that bottle feeding may have a longer duration of diarrhea; then, some of the research shows buckets have a longer duration.  So I think it just depends on how that research project was set up.”

Bentley says although the majority of the farms she works with in northeast Iowa have been using buckets, they’re increasingly switching to automated calf feeders, which are exclusively nipple feeders.  Automated feeders are used with calves in group housing, 25-30 to a unit.  “There are one or two stations with a nipple at each station, and all of the calves share the same nipple,” says Bentley.  “The calves wear transponders, so when the calf walks up to the calf feeder, the computer reads the chip on its neck and knows exactly how much to mix the calf.”  If the calf has reached its feed limit for the day, the machine switches to water; if it needs medication or milk replacer, those are automatically added as well.

Bentley says producers worried about the threat of disease communication when the units first came into use, but none of the farms she works with have experienced any increased incidence of disease.  She believes because the calves can eat whenever they want, their immune systems are more active than are the systems of those who only get their nutrition two or three times a day.

Bottle feeding starts when the calf is 2-3 days old; after the calf’s first two feedings of colostrum from the mother, the producer switches to either an esophageal feeder or a bottle.  Following those first 2-3 days, the calf is either kept on the bottle or switched to a bucket or to what’s called a “nipple bucket,” a large bucket ringed with nipples.
The calf needs to continue to receive colostrum the first two days, if not from its mother then from another cow that’s recently given birth; manufactured colostrum replacers are also available.  Sometimes those arrive frozen; because the antibodies in the colostrum are crucial to helping the calf build its disease resistance, thawing should be achieved slowly and carefully to avoid destroying the antibodies.

After day two, farms can switch to a calf milk replacer that’s mixed from a powder; they can also feed raw milk or pasteurized waste milk, which Bentley says is becoming increasingly common.  She explains, “Pasteurized waste milk is milk that cannot be used for human consumption and is normally thrown away, but if we can pasteurize it and kill the bacteria and the pathogens in the milk, it can be a viable source for feeding calves.”  Pasteurizers heat the milk to about 145° for 30 minutes; if you’re using one on-farm, don’t forget to sanitize the pasteurizer itself after each use.

Watch for the development of scours, which can be deadly in young calves.  If commercial treatments are unsuccessful, call the vet.  In the meantime, feedings with a calf with diarrhea should be smaller quantities and more frequent.  The milk should always be kept at a little above the calf’s body temperature, which is about 100° for a newborn.  Also, if ambient temperatures dip below 68° for calves under three weeks old and 50° for older calves, increase the amount of milk replacement per feeding by about two percent for every nine degrees below the trigger level.

Bottles are more labor intensive than buckets.  Many bottles can hold no more than two quarts; if it’s receiving pasteurized waste milk, each calf requires six quarts a day, so that’s three feedings.  Bottle nipples also require cleaning and sanitizing after each feeding.

Bentley says producers who feed from buckets will typically either leave them in the calf pen, where they can be used to dispense water between feedings, or removed entirely to be scrubbed in preparation for the next feeding.  But she says farms that maintain sanitary practices in the pens and with workers may not need to disinfect buckets after each feeding.  “You really have to look at the management practices going on in the farm,” she says.  “The key thing is to keep everything clean, whether or not you’re using bottles or buckets; keep utensils and equipment clean at all times, so it decreases the chance of infection of the calf.”

Calves may have to be trained to use a bucket; nipples come more naturally.  Iowa State Extension recommends teaching a new calf by having it suck on two fingers and then lowering your hand into the milk; milk will travel along the ridge between your fingers into its mouth.  Slowly remove your fingers; if the calf stops drinking, repeat.

Calves are taken off bottles or buckets at about 6-8 weeks.  Some producers prefer a cold turkey approach, replacing the milk in the bottle or bucket with water; others gradually reduce the amount of milk replacer the calf receives over a week’s time, in some cases replacing milk with water in one of the two daily feedings.  “Eventually that calf learns to increase her starter intake, and learns to consume more water and grain than milk,” Bentley says.

But there is one place where Bentley’s own personal preference is with bottle feeding, and that’s in a 4-H or FFA project.  “My son had a bottle calf this summer,” she says, “and he chose to feed it out of the bottle.  It was just a better experience for my child to learn how to mix the milk replacer, hold the bottle for the calf—and obviously, that was only one calf so we weren’t dealing with a lot of cows.”