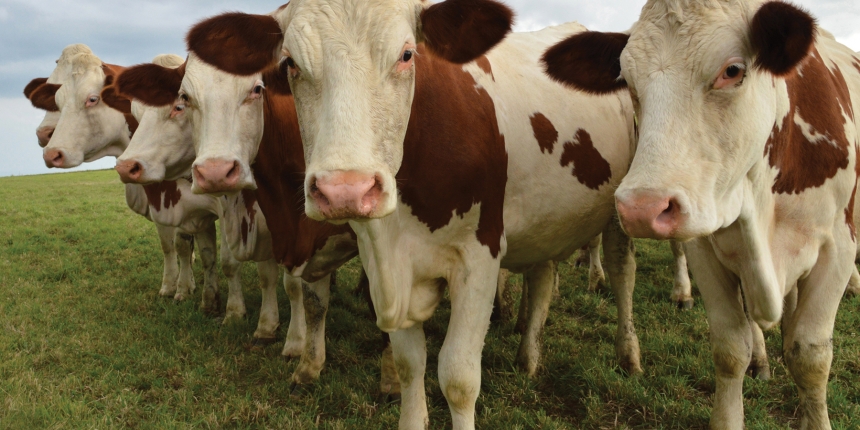 On dry years it can be a challenge to have enough forage for the cow herd.  There are several strategies that ranchers might utilize, to make it through a serious drought.

Destocking/Culling
If pasture and hay are in short supply and expensive, some producers cull harder and cut numbers—reducing the herd to what they can afford to feed.  This is the time to sell not just open cows but also any that may calve late, or have bad eyes, bad udders, bad disposition etc.

Dr. Bart Lardner, (University of Saskatchewan) says “it’s important to preg check and keep good records, to know which cows are bred in their first cycle and calving early.  You might not want to keep cows that breed late and might come up open the next year”. When you have cows bred in their second or third cycle or later, your calving period is extended.  This costs money, in terms of potential pounds of calf to sell, and those cows may breed late again,” he adds.

Performance of the calf is another thing to consider—the weaning weight as a percentage of dam weight.  “If a cow weans off 43% or more of her mature weight in a saleable calf, that’s acceptable.  If her calf is less than 43% of her own weight, she may be a larger-framed cow that is eating too much for what she is giving you back,” explains Lardner.  She doesn’t pay for her keep.
Recording information on each cow can help you in making culling decisions.  Notes from calving season could remind you that a certain cow had a bad udder (big teats the calf had a hard time getting onto without help) because her udder might not look so bad later in the year.

Neal and Amanda Sorenson (Powder River Angus) are 5th generation ranchers, raising registered Angus near Spotted Horse, Wyoming.  They are rigid in culling any cow that might become a problem.  “We tag and weigh each calf at birth.  This is a good time to look closely at each cow.  We give every cow a foot score, udder score and disposition score,” Neal says.  This is the best time to udder score because it’s easy to see if a calf would have a problem suckling. “Another factor in whether we keep her is how much calf she weans.  We also want a very short calving season, so if a cow is not bred in our preferred time window and will be calving later, we may sell her,” he says.

In a drought situation you probably should take that opportunity to sell any cows that might have a problem; you’ll end up with a better herd.

Early Weaning
Alexis DeCorby, BSA, AAg (Government of Saskatchewan, Livestock and Feed Extension Specialist, Ministry of Agriculture) states when forage availability is low, early weaning can be a way to take pressure off cows; they might be able to regain weight before winter and be in better body condition.

“A fatter cow is easier to feed through winter if you have limited feed, in contrast to a thin cow that needs to put weight back on.  If cows come off pasture in low body condition and we have to supplement them right away, we lose the opportunity to utilize poor-quality feeds when they are no longer lactating and their nutritional requirements are lower.  Early weaning can save producers a lot of money because it gives the cows a chance to put weight back on before winter,” she says.

Additionally, David Bohnert, Beef Extension Specialist and Ruminant Nutritionist, Oregon State University (Eastern Oregon Agricultural Research Center, Burns, Oregon) says ranchers can improve cow body condition score by weaning earlier.  “Our data shows that cows go into winter at least one body condition score higher than if you leave calves on until fall.”  This is better for the cow, for next year’s calf crop and breed-back.

“When cows are in better shape coming into winter, this means less feed you have to provide to get them to optimum condition.  Maintaining them through winter is easier.  When you take that calf off, you are probably reducing the cow’s nutrient requirements by about 40% since she is no longer lactating.  Depending on the calf’s age and size, you can expect a decrease in overall forage intake somewhere between 10% and 60% by early weaning compared with traditional weaning”, he explains.

Large-framed cows with high milk production don’t do well in harsh conditions if they are still lactating.  “This is why on most ranches early weaning during a drought can help.  In just 80 or 90 days without good pasture conditions, these cows may lose a whole body condition score if you leave calves on them”, he explains. This is one more reason to have smaller, more efficient cows that don’t milk so heavily.

Alternative Feeds
When traditional feeds are in short supply or very expensive, many producers look for alternatives to the ranch. “Common alternative feeds in the Northwest include grass seed straw, distillers’ grains (a good energy/protein supplement), and cornstalks,” says Bohnert. Additionally, depending on your location to bakeries, canneries, and other markets, Bakery waste and culled vegetables can be added into cattle rations.

A nutritionist here in Oregon once created a ration using cherry pies, candy bars, and corn flakes as part of the energy base, and cattle did fine on it,” says Bohnert.

“A beef cow has the advantage of a large rumen.  As long as there are no toxins in the feed, rumen microbes can ferment and use nearly anything as a source of energy or protein. We can take advantage of their ability to digest nearly anything.  Cattle are also wonderful harvesters of low-quality forages or failed, drought-damaged crops, but these may need supplemented with protein and/or energy,” he says.

“Some of the things that can be fed include the liquid (“syrup”) from distillers’ grains, or from making alcohol. Alternative feeds can help lower feed costs.  The main thing that limits their use is location; you must be close to where they are produced or it will cost too much to transport them to your place”, he says.

When To Restock
Jenny Pluhar, a range scientist/consultant in Canyon, Texas says that in regions that have had multiple years of drought it will take more than a few rains or even an “average” or “above average” year for grass to recover, especially if it has been overgrazed.   She shows people an illustration of grass that was lightly grazed, with lots of root mass underneath it, compared to grass more severely grazed, with less root mass.  The next picture shows grass that was grazed hard over multiple years, putting all its energy into trying to maintain some life on the surface—with significantly less root mass.  That grass died.

“We see a lot of dead grass in this part of the world.  It is not so much an effect of drought, but from historic heavy stocking during the drought. It’s not the drought that killed the grass, but all the years of heavy grazing,” she says. A person should evaluate grass before it goes dormant in the fall, and make sure that at least 25% of those plants have seed heads.

“I tell the people who want to restock that they shouldn’t make that decision just because the pasture looks green now.  Walk through and evaluate it more closely.  The perennial grasses may be dead.

“The first step is to identify what’s growing. If it is grass, see what you have for subsoil moisture, and realize that it will take some time to make up for the severely dry year(s). What’s happening beneath the soil surface is more important than what you see on top.  You need to accurately assess how healthy your rangeland is”.  Stocking rate must be adjusted frequently, to stay in synch with what the forage can support.