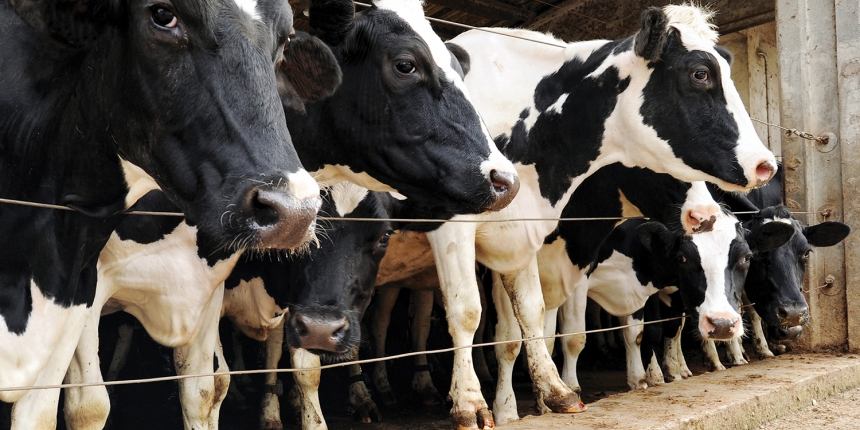 Hoof cracks are fairly common in cattle.  These are usually divided into two categories—vertical (sandcracks) and horizontal.  If the crack goes clear through the hoof horn into sensitive tissue, it causes pain and lameness.

Dr. Jan Shearer, Professor and Extension Veterinarian at Iowa State University, says vertical wall cracks are more common in beef cattle than dairy cattle, but horizontal cracks are common in all cattle.  Environment plays a role.  If feet are continually wet they get softer and more easily damaged, and in a dry climate they may become brittle and possibly more prone to cracking.  “In dairy cattle a wet environment is detrimental because it contributes to excess wear on the softer feet, especially if they are on concrete.  In beef cattle, one of the suggested causes of vertical wall cracks is drying,” says Shearer.  If feet are alternately wet and dry they are more prone to cracking.

Other factors in hoof hardness and health include diet.  Mineral and vitamin deficiencies may lead to weaker hoof structure.  “It’s hard to narrow this down to specific vitamins and minerals but these are factors commonly considered to play a role in vertical wall cracks,” he says.

Horizontal Wall Cracks
Horizontal cracks that run parallel to the coronary band are common in both beef and dairy cattle because they are often due to physiological changes that create disruption of hoof horn formation.  These cracks are often fairly superficial, but they can result in severe lameness if they become deep.

Rings around the hoof are very common because the hoof wall grows at different rates during various seasons and also changes for physiological reasons, creating growth rings—which may occasionally become cracks.

“Every time the cow calves she goes through a period where hoof wall growth slows down or stops.  There is a physiological change, affected by her hormones and metabolism as she goes from a non-lactating to a lactating stage.  Major changes occur in her body, and the epidermal growth factor receptors are either more receptive or less receptive, and this is partly what influences hoof growth rate; it’s all affected by the changes that occur at the time of calving,” explains Shearer.

“Some people call it stress, but this is a very difficult term to define.  I would rather say that there’s an interruption of hoof horn growth that creates a horizontal groove, or a growth arrest line—which is associated with calving,” he says.

The physiological changes begin prior to calving and continue into early lactation.  “Formation of hoof horn during this transition period is a lower physiological priority, compared with initiation of lactation.  The result is interrupted hoof growth that shows up as a horizontal groove in the hoof wall,” he says.

The hoof wall grows at approximately ¼ inch per month.  “You can estimate when calving occurred by looking at that ring/line around the hoof and measuring down from the coronary band.  The location of these horizontal wall cracks can also help you estimate approximately when those will grow out,” explains Shearer.

If a cow has horns, this same change occurs in horn growth.  “If you look at the rings on her horns, they signify when each calf was born.  If a cow has had 8 calves, there will be 8 rings on her horn.  She doesn’t automatically get an annual ring; the change occurs with each calving,” says Shearer.  These growth rings are consistently found in both beef and dairy cattle.  If a cow skips a year and doesn’t calve, she won’t develop a new ring that year.

Growth arrest in the hoof horn is multi-factorial and can also be influenced by a change in nutrition.  Seasonal changes are another factor in hoof growth rate.  This may be partly nutritional (time of year when feed is more plentiful, with green grass) or due to longer hours of daylight.  “Growth rate is affected by physiological factors and may not have as much to do with availability of nutrients as it does with number of hours of daylight.  Some of these things are not well understood, but people need to realize that not all horizontal rings are indicative of disease,” he explains.

“Some rings are associated with disease situations or extreme changes in nutrient level or balance or availability, but it’s not always easy to determine how important these are.  With horizontal growth arrest lines, we sometimes see a true hardship groove, which is an extremely significant or deep horizontal groove—and we tend to associate this with something beyond normal physiological changes,” he says.

This growth disruption may be due to disease.  When horn formation resumes, a full-thickness crack sometimes develops.  “We are not always sure about the cause.  These severe disruptions in hoof horn formation create distinct ridges and grooves. In the most extreme cases where the fissure is deep enough to create a full thickness defect in the wall, this lesion is often called a “thimble”.

When a deep crack gets down to the level of the corium—the sensitive “quick” underneath—it goes all the way through the horn.  “The fragment below the crack may become separated from the hoof wall above it.  As it is growing down the foot and wearing away, a deep crack may become painful because every time that fragment moves, it pinches the underlying corium tissues,” says Shearer.

Vertical Cracks
These are often called sandcracks and are relatively rare in dairy cattle.  “Fewer than 1% of dairy cows develop vertical wall cracks, whereas more than half of beef cows may get vertical cracks.  The majority of these cracks occur on the outside claw of the front foot.  The front feet carry a little more weight than the hind feet.  The inside claw is slightly larger, and bears most of the weight,” says Shearer, but there may be more movement and strain on the outer claw.

“Some people think cracks are related to dryness, or the fact that front feet have a steeper angle than the hind foot and are thus subjected to more stress.  Yet dairy cows have the same steep angle in the front feet as beef cows,” he says.

“Based on the numbers, there seems to be a breed predisposition to wall cracks.”  Some family lines, in any breed, have more tendency to cracking.  In a certain herd, often the cows that develop vertical wall cracks are related.

“Other factors associated with vertical cracks include vitamin and trace mineral deficiencies.  Some people have suggested that laminitis may play a role.  Some of the reasons remain a bit of an unknown, however,” says Shearer.  In some cases body condition may be a predisposing factor; heavy, overweight cattle may be more at risk.  Age may also be a factor, since older cattle tend to have more sandcracks.

Selenium—either too much or too little—can have an adverse affect on hoof wall strength and growth.  “There are many possible causes for cracks, and some of these factors may vary from cow to cow, regarding vulnerability.”

Treatment
If a crack is severe, we may need to limit the cow’s movement, so she doesn’t have to walk very far.  “If one side of the foot is a little better than the other, we may try to thin the horn or stabilize it in some way, and take the weight off the claw where the fragment is less stable.  We may put a wood block under the healthy claw, to leave the cracked claw up off the ground so it won’t have to bear weight.  If we get the weight off, the corium won’t continue to be traumatized, and will hopefully heal and start to produce new horn.  Once it does that, it will self correct,” says Shearer.

“The main objectives are to stabilize the portions of the wall that are loose and moving/pinching.  There are a number of ways this can be done.  Sometimes the two fragments are wired together, or stabilized by other means.  Taking the weight off the most damaged claw will hopefully enable it to heal and stabilize itself.  A wooden block can be nailed or glued to the healthy claw,” he says.

“If a vertical crack goes all the way up to the coronet (essentially splitting the outer part of the claw in two) there could be some movement between those two pieces and the wall is unstable.  It is difficult to stabilize those and there are a number of ways people try to do this.  If I can put a thin block under the fractured claw to help hold it together, and then a thicker block under the other claw, the healthier one can carry the weight.  The thin block on the cracked claw helps stabilize the two pieces at the sole,” says Shearer.

“Another way it can be done is to wire the two pieces together.  We can also use some kind of hoof cement/glue to stabilize the wall.  These tactics require time and effort to accomplish, and it may or may not work.  These cracks are quite complicated and take a long time to heal, or may never heal, and may become a permanent condition.  A vertical wall crack associated with white line disease often results in damage to the underlying corium to the extent that we can’t ever get good hoof horn to form over that area again.  These can become chronic conditions,” he says.

“There are surgeries that can be done.  Sometimes the foot ends up with serious wall ulcers.  Only a small percent of hoof wall cracks actually cause lameness and need to be treated.  But whenever the cracks cause lameness, they can be very complicated to manage—especially the vertical wall cracks.  These can be hard to stabilize,” he says.

“If the foot is overlong, we trim it back, and sometimes we can remove the fragment or a portion of it, by trimming.   Sometimes we can trim it enough that it won’t be flexing so much.  The key is to remove or stabilize it.  Depending on how far down the foot it is, sometimes trimming alone can provide the cow some relief until the foot can grow out.  It’s the movement and pinching that causes pain.”  An overlong toe creates more prying forces on the loose portion.