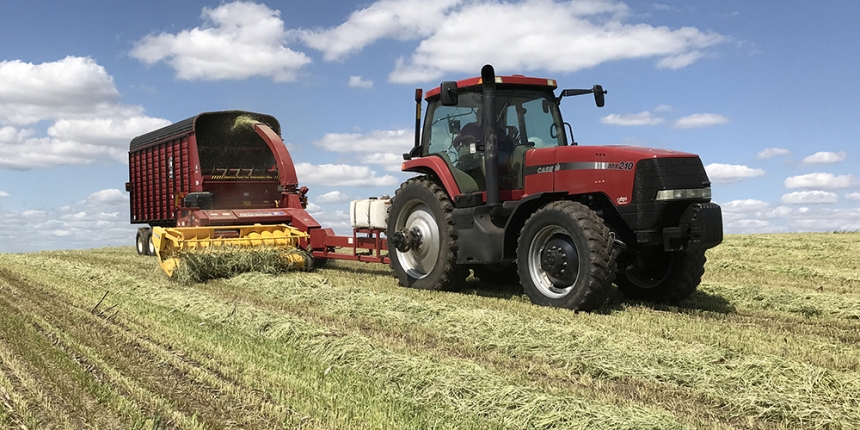 With more high-quality dairy feed needed throughout the country, some farmers have turned to double cropping winter small grains and corn silage. Variable costs are increased by planting two crops in a year, but fixed land cost can be spread across the two harvested crops.

Harvesting both crops for silage allows for a good planting window for the winter small grains: September through early October in the Upper Midwest, but it may delay corn planting in the spring. Farmer preferences vary between winter rye and winter triticale for the small grain of choice in this system. Winter wheat doesn’t produce the forage tonnage of either triticale or rye. Winter triticale produces high forage quality when harvested in the boot stage, but is unreliably winter hardy. Winter rye, on the other hand, is the most winterhardy of all small grains and is carving out a niche as a reliable cover crop, alternate grain in feed rations, and complementary silage crop to corn.
Double-cropping studies from Wisconsin and Minnesota using open-pollinated (OP) rye varieties showed that when rye silage was harvested before corn planting, there was a reduction in corn silage yields in slightly more than half of the years studied compared with corn silage alone. But, the combined silage yields and value of both rye and corn silage crops were greater than corn silage alone.

This practice has great environmental benefits. Double cropping rye and corn silage crops increases soil cover, soil carbon accumulation, and can nearly eliminate nitrate buildup and leaching, common in corn silage systems with regular manure applications.
Overall economic returns in those studies were not consistently higher with the double-crop system. Variable costs of production are increased, while corn silage yields may be slightly decreased. Consistent profits rely on good rye silage yields and forage quality. Traditional rye varieties are open pollinated and have been selected for grain yield. When cut for silage, they range in yield from 1.0 to 2.0 DM tons per acre.
Hybrid winter rye, however, is a game changer for this double-cropping system. Developed in Europe, hybrid rye has been available in the U.S. for three years. Some hybrid rye varieties have been selected for grain and others specifically for forage. True hybrids, these rye varieties outyield both their open-pollinated grain and forage-type counterparts. In addition, they are shorter and more uniform in height; have larger root systems, which improves performance in low moisture conditions; stand better; have better disease tolerance and they mature more uniformly than open-pollinated varieties. For comparison, think hybrid corn compared with traditional open-pollinated corn varieties. 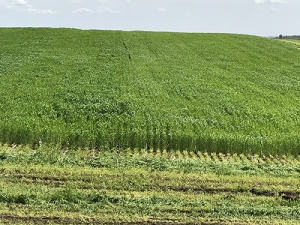 The University of Wisconsin evaluated forage hybrid rye varieties, including the variety, KWS Progas, with Trical winter triticale in 2017-2018. Both crops were planted in the fall of 2017 and fertilized with 55 pounds per ac N. Silage yields were measured twice: at head emergence and at the milk stage of kernel development (Table 1.). When harvested at early heading, KWS Progas hybrid rye and Trical triticale did not differ in crude protein or relative feed quality (RFQ). Due to greater DM yield, the KWS Progas hybrid rye had the potential to produce over 1,100 more lbs of milk per acre! When harvested later, at milk stage, KWS Progas produced 1.25 more tons dry matter per acre than Trical triticale and nearly 4,600 more lbs of milk per acre.
Dairymen and experienced double croppers, Luke and Jeff Meffert, compared KWS Progas hybrid rye last winter and this spring (2019) with their usual VNS (variety not stated) rye on their farm near Waunakee, WI (Table 2). Rye silage yields were lower than they had hoped, in part, due to weather conditions, but KWS Progas outyielded the VNS rye by 22 percent, which means that KWS Progas had the potential to produce 900 more pounds of milk per acre than the VNS rye.

In a double-crop silage system, rye silage would typically be harvested in the boot to early-heading stages (about mid to late May in southern Minnesota) to allow time for corn planting. Corn hybrid maturity may need to be shortened to ensure time to establish hybrid rye in the fall. The best hybrid rye yields are achieved with early fall planting (September in the Upper Midwest), seeding at 800,00 seeds per acre, and no more than ¾” deep. Hybrid rye is planted at lower rates than open-pollinated varieties to take advantage of their tremendous capacity to tiller. Hybrids can produce two to four times the number of tillers of traditional OP varieties. Each tiller represents more potential leaves, which contribute to silage yield.
Double-cropping hybrid rye and corn requires enough growing season for both to ensure acceptable forage yields, and approximately 32” of rainfall or more per year. This system is suited for southern Minnesota and Wisconsin, southern Ontario, the southern half of New York and states south. 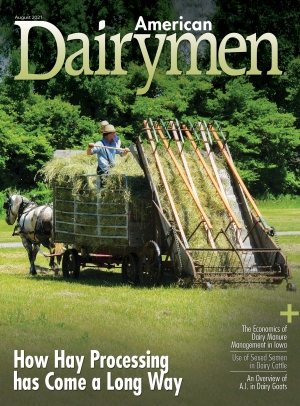 In this IssueFinding The Right Bale ProcessorThe Economics of Dairy Manure Management in IowaUse of Sexed Semen in Dairy CattleTIMAB USA’s uniquely formulated pHix-up is making an impact on rumen pH managementPBI...

In this IssueHeat Stress Mitigation Is A Worthwhile InvestmentImportance of Dairy Barn VentilationTaking Milking To the Next LevelIowa Dairy Goats: Survey Shows Potential for Growth and Improvement