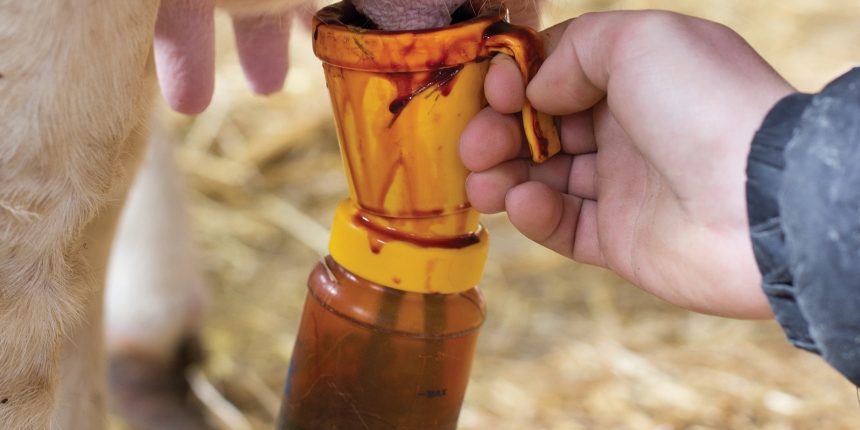 There are many interconnected layers to dairy cattle management. Any issue within a single layer could indirectly or directly affect another one leading to a detrimental cascade of events. Mastitis is one such issue that when not detected, treated or managed properly will likely cause many other areas to degrade rapidly.

Often this disease doesn’t end with one animal. In many cases, farms without good mastitis protocols in place often have widespread outbreaks that lead to major production losses and lack of milk quality. And even when the best practices are implemented, there is still lots of room for subclinical cases to take root and slip by undetected.

Understanding the difference of clinical and subclinical incidences and how they should be treated is a healthy foundation to discerning the best technology and tools for mastitis management and detection.

Where it all begins
Mastitis frequently (but not always) stems from gradually letting management of cleanliness and upkeep lack. Keeping a clean environment will play a huge part in the onset of mastitis. This is especially true of the environment cows are milked in and return to before their teat ends full close and replug after milking.

In addition to this, poor vs high quality employees are a big component from avoidance through treatment. Employees who have a detailed and thorough training on preventing mastitis and detecting it early are pivotal at keeping treatment costs as minimal as possible.

Fortunately, technology – while not a substitute for good practices and employee education – has come a long way in pinpointing mastitis cases early on, most of which are easily taught to employees and incorporated into the milking process.

Modes of detection and management
While clinical mastitis detection is easy to train for, subclinical cases often cause the most financial damage on dairies. The only way to detect these cases are with diagnostic testing, however they can still raise somatic cell counts (SCCs) and cause subtle dips in production.

The tried-and-true method familiar to most dairies, is the California Mastitis Test or CMT. This in-parlor test can identify subclinical cases and is standard protocol for fresh cows in many places. But beyond fresh cows, this test isn’t usually done until an animal is showing some level of symptoms like inflammation. It also cannot diagnose the pathogen causing infection, only that it’s there.

Another mode of early detection are SCC results from dairies who are on milk test. This is particularly helpful because it will pinpoint subclinical animals, but unfortunately results aren’t available instantly. This means by the time the animal is identified she may already be clinical anyway.

A newer measure of detection is conductivity, which measures the salinity of the milk through electric conduction. This increase in salinity is caused by damaged and inflamed cells altering the contents of the milk, even before the udder shows any visible signs of swelling or distress. However, this test doesn’t necessarily test for infection specifically – only an internal inflammation.

Furthermore, the point in an animal’s lactation – as well as equipment used – can also impact conductivity levels, according to an article by Aurora Villaroel, DVM.

Because of the inclusivity of many results, Jeff Bewley in a University of Kentucky Extension article, notes that the use of conductivity systems have been somewhat limited in the industry compared to in-line sensors in certain parlors and tests like the CMT.

For milking systems equipped with in-line sensors, the results can vary exponentially based on the technology used (which includes a wide variety from detecting changes, to color variations, to using spectroscopy identifying odd textures), and the algorithms in place as illustrated in a National Library of Medicine article Sensors and Clinical Mastitis—The Quest for the Perfect Alert. This makes it difficult to compare and test different options against one another, and the researchers reported that none of their 2010 studies “satisfied the demands for (clinical mastitis) detection models.”

It should be noted that the quest to make good mastitis tests as automatic as possible is still something the industry is strongly pursuing. And not all of this happens directly in the parlor. With the promise of more advanced rumen boluses which monitor an animal’s body temperature and other subtle internal changes there will likely be systems to automatically alert managers to cows showing abnormal characteristics early on.

On-farm culturing systems are also expanding to be more affordable, efficient, accurate and easy to use for managers and employees. Culturing is probably one of the best – if not the best – options for mastitis testing because it will reveal the exact pathogens at the root of the problem. While these are promising, there is still the overarching theme of knowing what cows to test and how frequently to do so. Hopefully, they can be pared with some of the aforementioned methods for early detection as they become better.

It’s not all technology
No matter how great technology becomes or what is deployed on an individual farm, there is one unchangeable side to success and that is management and employee training. As always, mastitis prevention is the most powerful tool in your arsenal. Be sure that there is standardized training for all milkers and written protocols for reference somewhere easily accessible. All the sanitary tools needed – such as clean towels, pre and post dips, and sanitizers – are well stocked. Even those indirectly affiliated with the milking process, such as people scraping allies and rebedding stalls, are aware of the sanitary standards so animals have a clean place to go back to.

Be sure that you also have individuals on your team that are trained in accurately using whatever mastitis detection tools you have on the farm. They should be very responsive to questionable animals and be able to administer testing, identification and follow through with any additional treatment in a timely and accurate manner.

How frequently testing is done and ways to identify sick animals will vary based on your operation and tools available. The University of Wisconsin Extension suggests regularly conducting the following types of screening tests for overall herd health: bulk tank somatic cell count (BTSCC), bulk tank culture, individual cow culture, and PCR (Polymerase chain reaction). Each of these tests can allow for either herd detection, individual cow detection, or presence of contagious pathogens.

Mastitis has been a part of dairying as long as we’ve been milking cows. But today we have the boons of detection and screening protocols to help alleviate the burden as much as possible. Undoubtedly there will be more technologies to come in the near future, and no one option will be a guaranteed fit for any dairy. Remember the tools should naturally fit your operation and you shouldn’t expect to have to re-think your operation to fit them.