The cornerstone of any good dairy operation is the health and well-being of the animals themselves. Every dairy producer understands that the cows within a dairy operation need to be in the healthiest state in order to meet a farmer’s production goals.

That vision is the same for Provita Animal Health, a group of biotechnology animal health innovators. Based in Northern Ireland, Provita Eurotech Ltd. is engaged in the development, manufacturing, and marketing of natural animal health products.

“Through research, development and the supply of innovative animal health products, Provita seeks to offer the best possible natural animal health solutions for the improvement of welfare, health and performance of animals throughout the world,” says Karla Hedley, business development manager at Provita.

Provita Animal Health facilities are purpose-built for the manufacture of animal health products. As Hedley explains, the original site is the only GMP licensed facility for the production of veterinary probiotic medicines in Europe. An additional site was acquired where hoof care and topical products are manufactured and audited by the FDA.

Some of the key products include:
Provita Protect for Calves
Provita Protect is an oral-fed microbial for calves containing live, naturally occurring microorganisms that crowd out harmful bacteria and kick-start newborn calves.
Hoofsure Hoofcare Range
Provita Hoofsure Endurance is a unique, scientifically formulated footbath solution containing a proprietary blend of essential oils and wetting agents. It works after 24 hours in soiled footbaths and is biodegradable.  Its highly concentrated formula means that 5 gallons is effective for 5000 cows.

As Hedley explains, Hoofsure Konquest is applied to larger lesions with or without a bandage at the first signs of lameness. It has advanced bio-adhesion properties which help the gel stick to the skin and hoof.

For immature lesions, Provita has developed a unique non-antibiotic spray, Hoofsure Combat. It is a unique film-forming spray containing tea tree oil and organic acids, providing persistent longer-lasting activity. Combat should be used for spot spraying in the parlor or during hoof trimming. It provides a waterproof, breathable film which promotes natural healing.

Making an Impact
So what makes Provita’s products unique and how is the company’s more natural approach beneficial to the animals?

Quite simply, the Provita team recognizes that there are growing concerns about the continued over-use of antibiotics – in both the treatment of animal illnesses and their inclusion in animal feeds.

“Serious questions are now being asked about modern methods of animal production. Vets, farmers, producers and consumers are demanding alternatives that ensure food is produced efficiently and effectively,” Hedley says. “But they also want to maintain animal welfare and see that food is produced as naturally as possible. Provita’s products aim to deliver a more natural approach.”
Antimicrobial resistance is of huge global concern meaning that non-antibiotic alternatives and good management practices will be at the forefront of achieving such targets, whilst maintaining animal health.

“Microorganisms and probiotics have a role in promoting animal health and in reducing the need for antibiotic,” Hedley says.

Caring for Calves
For calf health, prevention is better than cure, and a healthy gut microbiome and a healthy immune system will reduce the risk of infectious disease and therefore curb the reliance on antibiotics.

As Hedley explains, much American research on rearing pre-weaning calves has shown that early antibiotic usage actually lowers the animal’s immunity, and that calves treated with antibiotics pre-weaning have lowered milk production and reduced productivity as adults.

“Probiotics on the other hand, have an additive effect on the gut, by seeding beneficial organisms which competitively exclude pathogens from establishment, and also by stimulating the body’s immune system,” Hedley says.

What’s Underfoot
In hoof care and health, historically many dairy producers have relied on the use of antibiotic footbaths to control digital dermatitis. Although antibiotic use can be very effective, they should be reserved for treatment purposes and not for prophylactic preventative therapy.

“Formaldehyde and copper sulfate are the most commonly used non-antibiotic footbaths and both have issues for sustained use going forward,” Hedley says. “Concerns due to formaldehyde being a carcinogen and copper being a biohazard means their long-term use is questionable.”

A Personal Perspective
Provita’s commitment to the sourcing of the highest quality natural ingredients offers a reassurance and quality that is evident in the Shaw family farm on the outskirts of Castlewellan in Northern Ireland.

The business is home to a small herd of spring calving suckler cows plus a number of bought in cattle. It is policy to buy-in 30 Continental-cross dropped calves during the autumn period. These are then kept on through to their second year. The most recent acquisition in this regard is a group of choice Belgian Blue calves.

As explained by the Shaw family member, “It is critical for calves to get the best possible start. We will make sure that each calf born to our own suckler cows gets plenty of colostrum during those first critical hours of life. Thereafter, every step is taken to ensure that the calf’s nutritional requirements are met in full. And this includes administering Provita Protect. It is also policy to treat each bought in calf with Protect. And all I can say is that the results achieved have been nothing more than positive. Each purchased calf gets two shots of Protect within 24 hours of arrival, which are followed up with single dose applications on days two and three. Since using Protect, scours have not featured at all within the calf unit.”

Adrian Scholl runs Le Marchant Farms in Nottinghamshire, England. They are milking 140 cows and have 100 followers. Adrian had big problem with Digital Dermatitis on farm and his vet recognized that it was a major cause for concern amongst his herd. Adrian sought advice from other dairy farmers and one friend recommended he tried Provita Hoofsure Endurance. Since being recommended to him, the farm has been using Provita Hoofsure Endurance for four years in conjunction with changing from straw to mats and sawdust for bedding. His current protocols include footbathing twice a day, twice a week and spot spraying every other day with Provita Hoofsure Endurance.

“After three or four weeks of using Hoofsure Endurance I saw a significant improvement, the cows were walking better and appeared more comfortable. I would recommend Hoofsure Endurance to anyone, as it has worked well on my farm. It is also gentle on the cows and quickly reduces inflammation. The cows are happier, and content and their milk yields are consistently high. It is very easy to use, and as it is non-toxic and non-carcinogenic I don’t have to worry about handling it,” Scholl says.

Looking Ahead
Success stories like the Shaw family farm is what drives the Provita team in its efforts to provide the most well-defined and researched natural animal healthcare products to dairy producers.

“We are constantly striving to increase our product range and have highly trained staff on site and embedded in major university partnerships to ensure that the quality of new products is of the highest standard,” Hedley says. “Our product development is always research led. We have extensive R&D capability with significant university collaborative projects. We work with Queens University Belfast, University of Kentucky and University of Madison.” 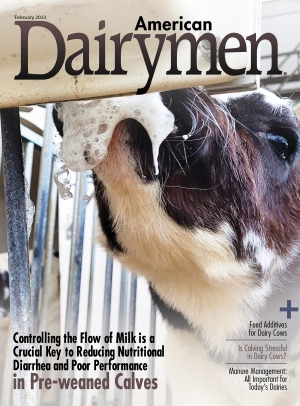 Feed Additives for Dairy CowsIs Calving Stressful in Dairy Cows?Manure Management: All Important for Today’s DairiesControlling the Flow of Milk is a Crucial Key to Reducing Nutritional Diarrhea and Poor...

In This IssueHow to Prevent Scours in Dairy CalvesTips for Winterizing your Calf Cares and ManagersForage Crops: Fresh Grass for High Producing Dairy CowsIntroducing the MagStreamPBI Parlor Systems: Standing the Test of...

In This IssueJohne’s Disease in CattleWays to Evaluate New Agtech before Bringing it to the FarmSupplemental Needs During WinterImproving Cow Longevity Starts with Quality FlooringDairy Goat Nutrition – The...
view all issues