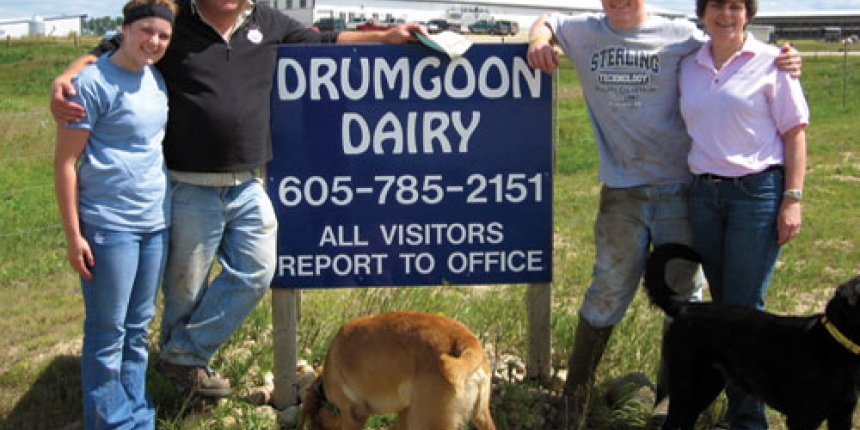 In the dairy industry, making decisions comes with the territory, but for Rodney and Dorothy Elliott, owners of Drumgoon Dairy near Lake Norden, South Dakota, their decisions have been a bit more complicated than most dairy farmers have to make. After owning a dairy farm in Ireland for 18 years, Rodney and Dorothy made the decision to leave their homeland and move to the prairies of eastern South Dakota.

For Rodney and Dorothy, the decision to move had to do with the lack of options in Ireland. “We had a 140-head dairy in Ireland and wanted to expand and grow the herd,” says Rodney, “but the local government was very restrictive and wouldn’t allow us to expand.” As Rodney explains, they lived in strong tourist area where land came in small and costly parcels that were also highly sought-after commodities for urban expansion. “They really didn’t want dairy farm expansion, and we just couldn’t see any way to make significant changes. We looked at other areas in Europe like Scotland along with central Europe countries and found the same issues.”

Then they came across an interesting possibility. The South Dakota Department of Agriculture had begun to market the dairy industry worldwide, especially targeting dairy producers in Europe and was sponsoring bus tours to South Dakota. In early 2004, Rodney and Dorothy took advantage of the opportunity and made their first trip to South Dakota. “We were excited with what we saw. We saw the opportunity to expand and the freedom to do so. The local government was very supportive and our potential neighbors were very welcoming. It was exactly what we were looking for,” notes Rodney.  That was the beginning, but it took a lot of patience and planning for the move to really happen.

After returning to Ireland, Rodney and Dorothy knew they needed to return with their three children so that they, too, could actually experience what had gotten their parents so excited about eastern South Dakota. In August of 2004, the Elliotts took a family vacation to South Dakota and really explored the Hamlin County region.

So far so good, but they had yet to experience a real South Dakota winter. They needed to know if they and their dairy cows could handle the bone-penetrating cold and blizzards that could roll across the Dakota landscape. So, back they came, this time in January of 2005 at the coldest time of the year. Upon their arrival, they were greeted with -22 degrees! However, Rodney and Dorothy also felt that they could build their dairy facility to handle the cold and snow, and that they and their cattle could adjust to the weather extremes.

As we spoke, Rodney and Dorothy laughed as they compared that severe cold to the mid-January weather they were experiencing in 2012. “This winter has been incredibly nice,” says Rodney. “Usually you have to begin preparing for the winter conditions in October and then you can only work outside so much depending on the winter. This winter we have been able to pretty much be outside working any time we want. Certainly, everybody is in good spirits, and definitely the milder weather is easier on the cows.”

Returning to Ireland, the Elliott family made the ultimate decision to move permanently to South Dakota. In May 2005 Rodney and Dorothy returned to purchase a house. The hope was that the move could be made by August so David (14), James (12) and Becky (10) could begin school in the Estelline School District with the new school year. The move would be easy for Dorothy, who was born in Connecticut, but there were a series of immigration issues that slowed the process for the rest of the family.

Still, there was business to do and no time to waste, so Dorothy came over by herself in September and purchased a 160-acre parcel of land that would become the site of Drumgoon Dairy. Finally five months later the entire Elliot family moved to their new home and by mid-February, David, James and Becky were attending school in Estelline. Still, they were several months away from a functioning dairy.

“In late May of 2006, we began construction and on December 20, we milked our first cows,” notes Rodney. Their cross-ventilated barn, which contains free stalls, first held 1400 head of crossbred Jersey, Holstein and Swedish Red dairy cattle. Thus began the operation of Elliott’s Drumgoon Dairy.

Five years later, Rodney and Dorothy are pleased with the way things have gone. First off, they feel a part of the community. “We had great neighbors in Ireland, and we have great neighbors here in South Dakota. We have had great support from our community,” says Rodney.  Believing in local support, Drumgood Dairy purchases almost all of their feed from Hamlin County businesses and area crop farmers.  That’s pretty big business when you calculate that $10,000 is spent daily to feed the herd.

At the same time, they have partnered with a number of local farmers and supply them with manure from the dairy.  After all, this amounts to about 35,000,000 gallons of liquid fertilizer each year. Rodney says this began through his visiting with area crop farmers. “I asked them to try out the manure and see if it made a difference. It’s been getting easier and easier. Now we are actually beginning to run short,” he says with a smile. This, too, is state of the art and environmentally friendly with a pipeline that delivers the liquid fertilizer to area producers as far as three miles away.

The Elliott kids have also fit right in. David is now 20 and attending Dakota Wesleyan University in Mitchell, SD, James is 18 years old and at Mount Marty College in Yankton, SD, while 16-year old Becky is now a junior at Estelline High School.

Certainly, prices have fluctuated, but if you’ve been in farming long enough, that’s simply a given. In 2008, after a year of excellent prices, the Elliotts expanded the barn 150 feet to the north and expanded their milking herd to 2,000. In addition, they also have a breeding operation that brings their total herd to over 3,700 animals, many of which are currently on four other sites within four miles of Drumgoon Dairy. In addition to the original 160 acres of land, Drumgoon Dairy now includes 400 acres, along with another 250 acres of rented land. Of that, 100 acres is alfalfa ground with another 100 acres of pasture for the heifers.

Rodney and Dorothy dreamed of expanding their dairy when the left Ireland, and they have definitely accomplished that goal. However, it’s more than just about getting bigger. They truly want Drumgoon Dairy to revolve around the word respect. Rodney says, “It’s about respect for the workers, respect for the land and respect for the cows. We look after every cow individually. They come first.”

Part of the growth allows them to be able to afford the high-tech equipment needed to keep up and to increase their efficiency. So, proper management is the key for success. In 2010, the Elliotts began raising their own heifers. Plus, they have even installed one of the first computerized calf feeding systems. The formula is blended automatically, and as the calf enters the chute to drink, a wireless reader identifies the animal and calibrates exactly how much feed that calf requires. It’s pretty much of an around the clock operation with the cows milked three times a day. Milk production is excellent with each cow averaging about 22,700 pounds of milk each year.

Most of the milk is sold to a milk supplier in the Milbank, SD area, and that means lots of milk tankers coming and going. Again, it’s all about local, and as Rodney notes, “A lot of our products actually come back to the Lake Norden Cheese Company, a division of Davisco Foods International.”

Milking occurs three times daily, so there are actually three shifts of employees. It’s no wonder that Drumgoon Dairy employs 33 total staff members. “That has been one of the most enjoyable parts of this job,” says Rodney. “We have wonderful employees, many that have been with us since we began. Over the years, we have had smaller dairy owners approach us about purchasing their herd, and we have done that.”

Dorothy notes that some of these former owners have then joined Drumgoon Dairy. She says with a laugh that their parlor manager, Kathy Verhoek, did just that. “Kathy sold her herd to us, came along with her herd and has been with us for four years! She is a wonderful person.”

Rodney and Dorothy have also developed a program for high school students looking for work. “Over the years we have had several high school students work for us,” says Rodney. “What we try to do is hire four students at a time but never have more than two working at a time. In that way, if one of them has a game to go to or something else school related, they have two others to cover for them.” At the same time, knowing the importance of their education and school activities, Rodney and Dorothy make sure that they only work a 4-8 p.m. shift and that they do not work any back to back nights during the week. They do try to get them to work one shift on the weekend.

As the positive word has spread about Drumgoon Dairy, Rodney and Dorothy have had a number of interns gain experience at their dairy. “The interns come from Ireland and Germany, along with local ag science colleges,” notes Dorothy. It is to the point that Drumgoon Dairy usually has two interns on staff at all times of the year. Some of these interns have come back to become full-time employees.

It’s been quite a journey for the Elliott family, well over 3,000 miles as a matter of fact. But it’s been well worth it according to Dorothy, “We are very happy here.” Rodney echoes those sentiments. “We like what we do, we like our neighbors and our community. We feel like we belong here.”

How about the future? Rodney continues with the same optimism and positive attitude he and Dorothy displayed when they left their homeland for America. “I’m confident that we’ll continue to see a strong market and the dairy industry will remain strong. I think well managed dairies will succeed with their margins.”

Is there expansion in the future? “We would like to give our children the chance to have the opportunity to come back to the farm,” says Rodney. “If that were to happen, then we would have to expand and probably purchase more land.”

In the meantime, for Rodney and Dorothy, it’s all about making the most of this opportunity to make Drumgoon Dairy the best that it can be. Along, of course, with a little luck of the Irish!